Fungal pathogens of grapevines all produce structures that allow them to overwinter on grapevine cordons, spurs, and canes.  In this way the fungi produce spores the following year that can further cause disease.  For example, grapevine powdery mildew produces a structure called a chasmothecium (cleistothecium) that washes from the leaves in the fall and winter.  They reside on exfoliating bark until spring when rainfall causes bursting of the fruiting body thus releasing the ascospore. 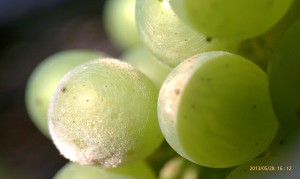 Botrytis produces a structure called a sclerotium which resides in mummified fruit or in diseased canes.  Phomopsis and Botryrosphaeria, reside in diseased cane or cordons and spores are released with spring and winter rainfall, respectively.  Eutypa resides on previously infected, dead wood and produces perithecia which contain ascospores which are released with rainfall in fall and winter and sometimes in the spring.  The vine decline and black measles pathogens (Phaeomoniella and Togninia) reside on 3-5 year-old pruning wounds and rotted out pruning wounds, respectively and release spores during winter and spring rainfall.

All of these fungi entire grapevine through pruning wounds and sometimes through tears in spur positions made during mechanical harvest.  One control strategy is to try to kill the fungi before spore release.  This can be accomplished by making applications of products during the winter either before or after pruning.  After is preferable because the materials get better coverage if nozzles are directed towards the cordon only.  Also, water volume is important in that you will be trying to drench the cordon.  The bigger the cordon and the larger volume of exfoliating bark can require up to 100 gpa water.

What products are effective? 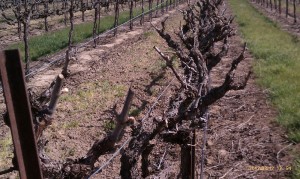 Liquid Lime Sulfur (LLS) is a general biocide that kills all the above species as long as it reaches the target.  A 10% solution should be applied in 50-100 gpa water depending on vine size.  This one treatment has been shown to give about 75% control of powdery mildew at disease onset, as well as 75% kill of Phomopsis pycnidia and Botrytis sclerotia.  The killing of canker disease fungi has also been shown.

Sovran is effective against Phomopsis and probably powdery mildew though no data exists for PM.

DF sulfur at 5 lbs/a is effective against powdery mildew and Phomopsis if used at 8-10 lbs/a.  Read label.

Vitiseal is effective against powdery mildew and canker diseases if applied immediately after pruning.